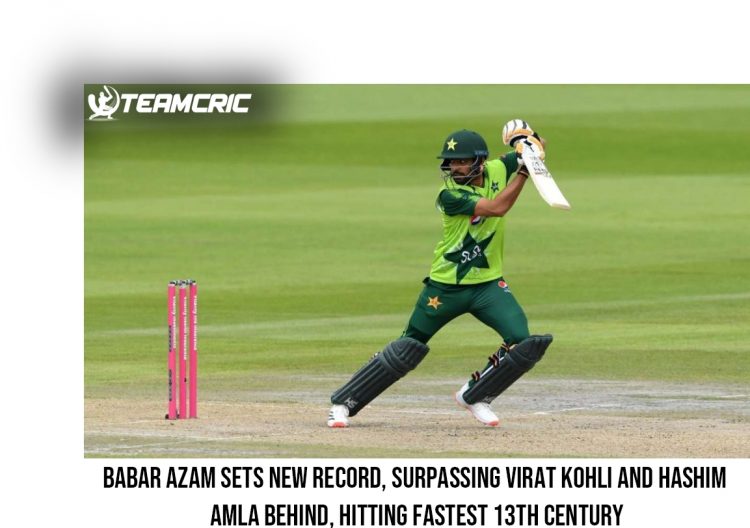 Pakistan skipper, Babar Azam scored his 13th century in ODIs in 76 innings, with this Babar Azam is the fastest cricketer to have such great attainment.

On Friday, Babar Azam has smashed his 13th One Day International century while Playing his 78th ODI . Chasing a target of South Africa of 274 Babar scored 103 runs to help the Pakistan team to win in the first ODI match against South Africa at the SuperSport Park.

Mohammad Babar Azam, 26 years old Pakistan cricketer became the fastest men’s cricketer to score 13th centuries in ODI cricket. Babar has made many records by his extremely tremendous performance. He has smashed 17 international centuries, 5 in Test matches and 12 in ODIs. He has been the leading run-scorer in Test matches for Pakistan in 2018 and 2019 and the leading scorer in One Day Internationals for the Pakistan team in 2016, 2017, and 2019.

He is the second-highest scorer of the world in Twenty20 Internationals in 2017 as well as the leading scorer for the Pakistan team in 2019. His name was on the list of ICC ODI Team of the Year in 2017 and 2019.

He was also named as the Pakistan Cricket Board’s ODI player of the year in 2017 as well as T20I player of the year in 2018. He smashed 125 against Zimbabwe in his previous innings and this excellent achievement made him the first Pakistan captain with successive ODI centuries.103 runs made by Babar Azam in a successful ODI chase is also the highest individual score by a Pakistan captain.

He overtook former Proteas batsman Hashim Amla and India skipper Virat Kohli and became the fastest cricketer to smash 13 centuries. Babar was able to score 13tons in 76 innings. Before this Hashim Amla was the fastest to 13 centuries in men’s ODIs, in 83 innings. . Kohli took 86 innings to score 13 ODI centuries. Australia women’s captain Meg Lanning also made 13 ODI centuries in 76 innings.