BCB declared 3 squads for Zimbabwe tour , one of the big announcement for Bangladesh cricketers 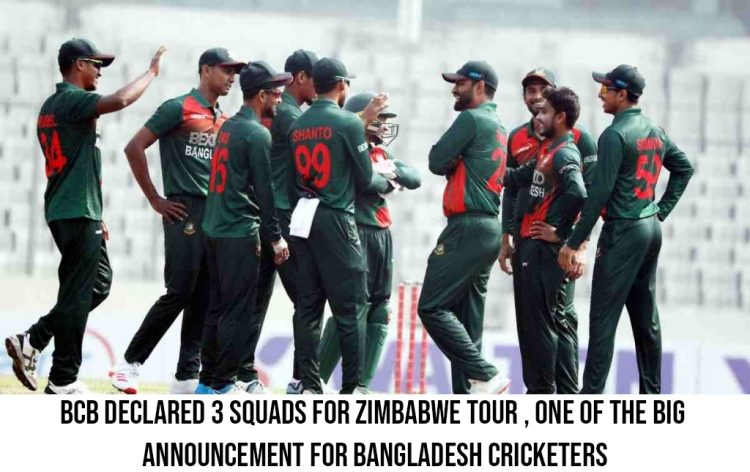 One of the most awaited announcements has been done as Bangladesh Cricket Board has announced the names of players for Zimbabwe tour of Bangladesh.

On June, Wednesday BCB disclosed the name of players for all- One day International, T20 and Test match. BCB declared 3 squads for Zimbabwe tour .

In July, Bangladesh will be playing one-off Test, three T20Is and 3 ODIs against Zimbabwe.

Bangladesh team will be playing practice match for 2 days that is July 3 and 4.

Previously the schedule was different as Zimbabwe and Bangladesh were supposed to play two Tests and two T20Is.

However both the boards changed their decision considering the preparation for T20 World Cup. As a result the number of T20I matches increased to 3 and number of Test match reduced to 1.

No change is made in the number of ODIs matches

BCB has divided the players in three parts for ODI, T20I and Test match.

Taskin Ahmed, Tamim Iqbal and Mushfiqur Rahim are not quite fine now but they will be fit to play before the start of the match.

Nurul Hasan got the opportunity to play this time after 5 years as last time he played 50-over match against New Zealand in 2016.

Taijul Islam and Shamim Hossain have got the chance to play.

Nurul Hasan has resumed shortest format of the game after five years.

Aminul Islam Biplob played well against Zimbabwe in 2020 and now has got the chance to show his talent.

Shakib Al Hasan has got the place in squad for test match. Although he did not play Test against Sri Lanka because gave priority to Indian Premier League.

He came in limelight because of behaving aggressively while playing Dhaka Premier League.

Rubel Hossain was not the part of home series against Sri Lanka but now included in the squad.