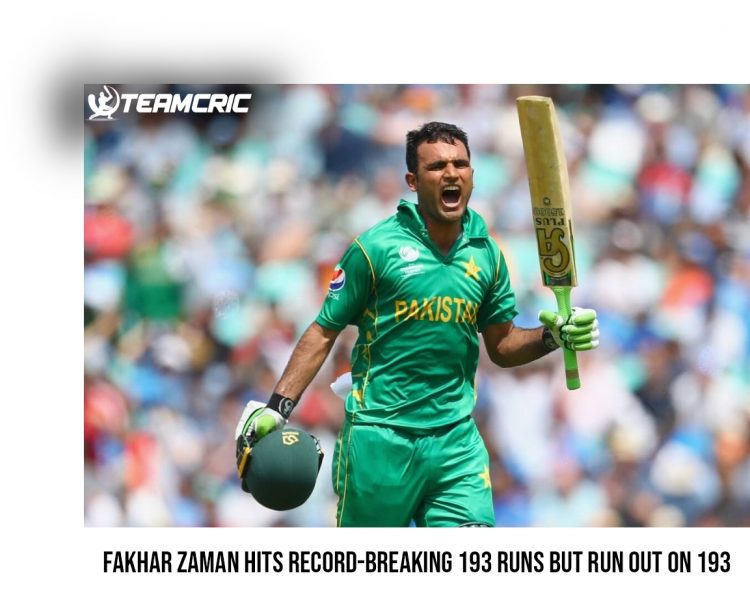 
Pakistan cricketer Fakhar Zaman missed his second double century only by 7 runs while playing ODI against South Africa Johannesburg on Sunday. Pakistan slipped to 85 for 4 in chase of 342 runs but Zaman’s effort is quite praiseworthy, as he was able to smash 193 runs from 155 balls. But the effort of zaman was not fruitful enough for Pakistan to win and South Africa won by 17 runs to level 3-match series at 1-1.

Pakistan opener, Fakhar Zaman hit 193 off 155 balls and became the highest scorer batsman batting second in ODI cricket. His performance lifted Pakistan out of trouble and gave quite a relief and hope of winning to host team but unfortunately, he was run out for 193 in the final over of the chase.

He was not able to emulate Rohit Sharma and missed an opportunity to become the first Pakistan cricketer to hit an ODI double hundred. Pakistan was in need of 31 runs to win in the final over and Zaman had scored his last 90 runs in 48 deliveries balls. Zaman was energetic enough to hit 10 sixes and 18 boundaries, keeping Pakistan in the hunt.

While chasing the target of 342 runs, Zaman hit a Lungi Ngidi delivery to Aiden Markram at long-off in the first ball of the 50th over. When Zaman was coming back for a second run, South Africa wicketkeeper Quinton de Kock pointed at the bowler toward the non-striker end and given the impression that he will throw the ball to the non-striker end.

Going through the impression of Kock, Zaman, slowed down as he moved towards the striker’s end. But in fact, the throw was aimed at the wicket-keeper and Zaman was unable to reach the crease, as a result, he was run out. Zaman was positioned to complete the second run but due to the signal is given by the knock that the ball will be going to the other end and stumps were hit by the ball.

Questions are being asked about Quinton de Kock’s deliberate attempt to distract Fakhar Zaman. He was trying to complete a double in the final over but he was run –out by a direct hit.

'In 10 years' time, everyone is going to play like Pant, Pandya': said Darren Gough