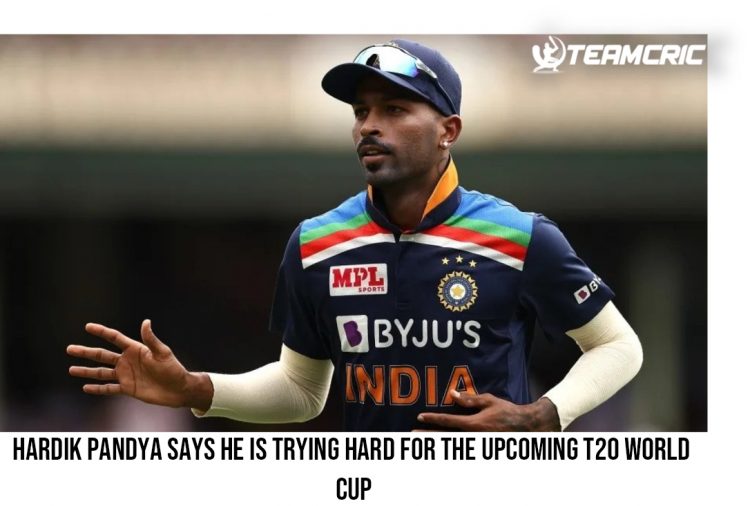 
Hardik Pandya says he is trying hard for the upcoming T20 World Cup:

T20 World Cup, 2021 is coming near and one of the attention-seeking points for team India is the inclusion of Hardik Pandya in the team, whether as an all-rounder or as a proper batsman.

Since back surgery, Hardik Pandya has not bowled quite regularly in an international cricket match.

Earlier this year, Hardik Pandya resumed bowling in the limited over series against England held in March.

The 27-year-old overall delivered 26 overs across the whole series.

In the 14TH  tournament of the Indian Premier League, he didn’t bowl at all, and questions were raised regarding his inclusion in the Indian squad as an all-rounder in the T20 World Cup but Hardik Pandya says he is trying hard for the upcoming T20 World Cup.

Providing answers to the questions, Hardik revealed that he is trying hard as well as working on his fitness to give vital contribution with the ball in the upcoming T20 World Cup.

Hardik Pandya says he is trying hard for the upcoming T20 World Cup:

“For me, I want to make sure, and I will be able to, that I bowl in all the games of the T20 World Cup. I am just trying to be smart and make sure that I don’t miss that. My full focus is on the World Cup,” Hardik told the Times of India.

He also explained that his bowling completely depends on his fitness and he wants to give contribution only when he is fit at 100%.

“Yes, on the bowling front, what matters is how fit I am. Even after my surgery, I didn’t drop my pace. My bowling is related to my fitness. The fitter I get, the better it comes out. Whenever I play, I don’t want to play at 50%. When I play, I will play at 100%,” added the Mumbai Indians star.