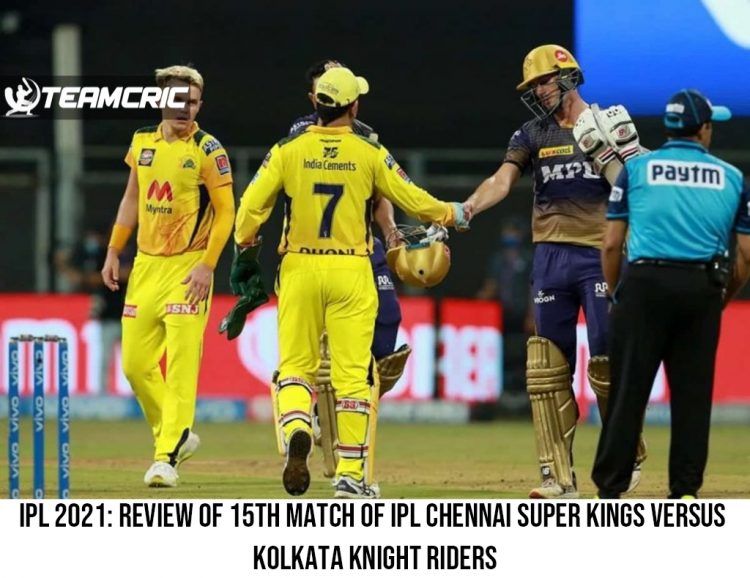 Kolkata Knight Riders won the toss and took the decision of fielding first.

Opener Faf du Plessis has shown excellent performance with his bat and smashed 95 runs off 60 balls including 9 fours and 4 sixes. Ruturaj Gaikwad was also seen in his brilliant form, smashed half-century scored the total of 64 runs off 42 balls. Partnership of Faf du Plessis and Ruturaj Gaikwad was proved vital for Chennai Super Kings and added 115 runs. Moeen Ali contributed 25 runs off 12 balls.

Chasing this total, KKR played with run rate of 10.53. Kolkata Knight Riders were looking weak in the starting only as they lost their 5 wickets after score of only 31 runs. Pat Cummins tried very hard with his bat till end to take his team towards victory as he smashed 66 runs off 34 balls but all his efforts went in vain. Andre Russell played excellently scoring 54 runs off 22 balls. Dinesh Karthik also played fine knock and smashed 40 runs off 24 balls.

Kolkata Knight Riders were all out for 202 runs in 19.1 overs and thus lost the match by 18 runs.

Faf du Plessis completed his 6000 T20 runs in this match and became the sixth player from South Africa to reach the feat of success.

The partnership of Faf du Plessis and Ruturaj Gaikwad contributed 115 runs and it was the highest opening partnership for Chennai Super Kings against Kolkata Knight Riders in IPL.

Chennai Super Kings made the score of 220/3 and it was their highest ever innings total against Kolkata Knight Riders. Moreover it was and fifth-highest total score made against all teams in IPL.

Pat Cummins scored 30 runs in an over against Sam Curran and it is the joint third-most runs made in an over by a player in IPL history.

Pat Cummins’ score in this match was the highest individual score by a number 8 batsman in an inning in IPL history. Before this it happened in 2015 when Harbhajan Singh had scored 64 runs while playing against Punjab Kings.

MS Dhoni became the first player to complete his 150 dismissals as a wicketkeeper in IPL history.