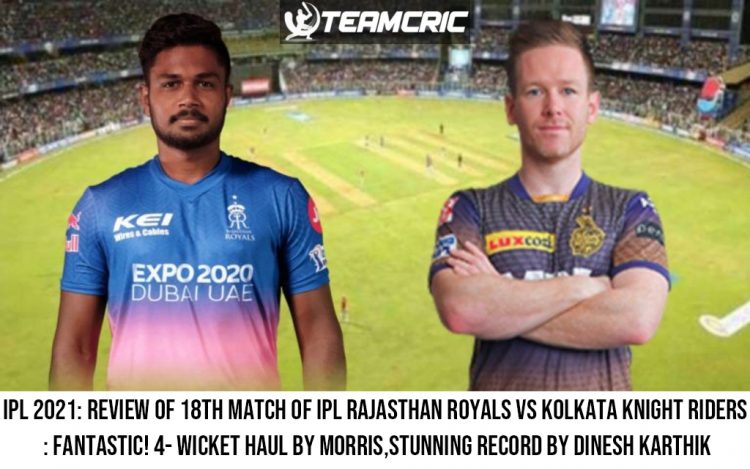 Rajasthan Royals won the toss and took the decision of fielding first.

Rajasthan Royals were defeated  Royal Challengers Bangalore by 10 wickets in their previous IPL match but now they bounced back strongly to  register victory against Kolkata Knight Riders by 6 wickets.

Kolkata Knight Riders played with run rate of 6.65 and they were able to score 133 for 9 in their 20 overs.

In the first innings Kolkata Knight Riders were not able to fight strongly. No one was able to make a big contribution. Top scorer was with Rahul Tripathi who smashed 36 runs of 26 balls with the help of 1 four and 2 sixes.

Captain Eion Morgan failed to give any contribution as he was out without scoring even a single run.

Chris Morris made his 4 -wicket haul and equalled best figures best figures of his carrier as he gave away 23 runs in his 4 overs.

Jaydev Unadkat, Chetan Sakariya and Mustafizur Rahman picked up 1 wicket each giving away 25, 31 and 22 runs respectively in their 4 wickets.

The target set was chased by Rajasthan Royals comfortably although they lost both the openers Buttler and Jaiswal in the power play.

Captain of Rajasthan Royals was the top scorer with 42 runs off 41 balls including 2 fours and 1 six.

David Miller was second- top scorer for Rajasthan Royals with 24 runs off 23 balls.

Yashasvi Jaiswal and Shivam Dube made equal runs (22) off 17 and 18 balls respectively.

Kolkata Knight Riders does not seem energetic with ball also. Varun Chakaravarthy picked up 2 wickets giving away 32 runs for 4 overs.

Shivam Mavi and Prasidh Krishna picked up 1 wicket each giving away 19 and 20 runs respectively.

Rajasthan Royals were able to score 134 runs in 18.5 overs and thus won the match by 6 wickets.

In 2012 Kolkata Knight Riders won last time IPL at Wankhede. After 2012 they have lost 8 matches including two matches in this season.

Kolkata Knight Riders have faced loss 4th time consecutively in this season. In 2019 also, they suffered such loss in last six years.

Chris Morris today took a 4-wicket haul for Rajasthan Royals in IPL. Before this Shreyas Gopal took 4-wicket haul while playing against RCB in 2018.

Chris Morris has now become the third player with multiple 4-wicket hauls (or above) for Rajasthan Royals in history of IPL.James Faulkner and Sohail Tanvir are on the top 2 positions in this regard. Chris Morris is the first player to make this achievement in different seasons.

It happened for the fourth time Chris Morris dismissed Andre Russell in IPL and this is the maximum number by any bowler. Jasprit Bumrah has dismissed Russell three times.

Number of dot balls bowled by Morris is the joint highest by a RR bowler in history of IPL. Sohail Tanvir against RCB and Shane Watson against CSK have also bowled 18 dot balls against CSK in an innings for RR.

Dinesh Karthik became the 12th player to score 1000 runs for KKR in IPL.

It happened for the second time that Rajasthan Royals beat Kolkata Knight Riders after returning from ban in 2018. The only other win for RR was at Kolkata in 2019.