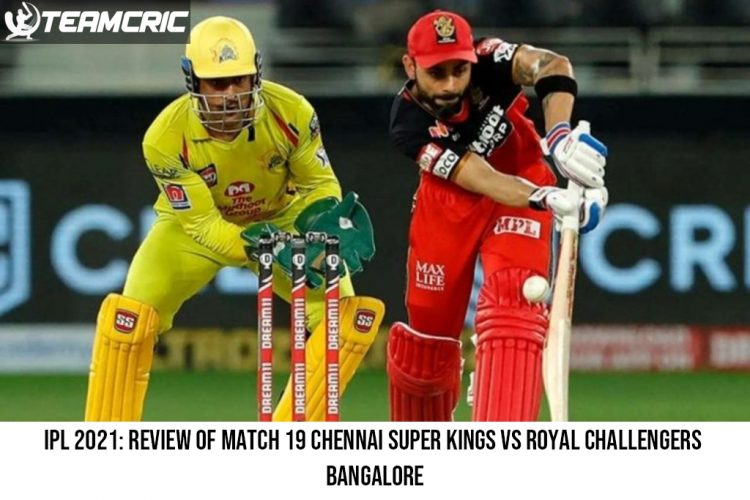 This was fourth consecutive win for Chennai Super Kings of IPL 2021. They are now on the top position in the points table. Royal Challengers Bangalore suffers their first loss of this season of IPL in this match.

Chennai Super Kings won the toss and took the decision of batting first.

Ravindra Jadeja was the top scorer as he smashed 62 runs in 28 balls with the help of 5 maximums and 4 boundaries.

Harshal Patel has shown highly energetic performance and picked up 3 wickets giving away 51 runs in his 4 overs.

Other bowlers were not able to pick a single wicket.

Chasing this total, Royal Challengers Bangalore was able to manage a score of only 122 for 9 thus lost the game by 69 runs.

Ravindra Jadeja bowled brilliantly and picked up 3 wickets for 13 runs in 4 overs.

Imran Tahir picked up 2 wickets for 16 runs in his 4 overs.

Harshal Patel conceded 37 runs in the final over and thus registered the record for joint-most runs conceded by a bowler. P Parameswaran has also made such record in IPL.

Ravindra Jadeja has become the first player of Chennai Super Kings to score a half century and pick up 3 wickets in a match in IPL.

Suresh Raina completed his 200 sixes in IPL in this match today. He is the fourth Indian player to have such a great achievement after MS Dhoni, Rohit Sharma and Virat Kohli.

Shardul Thakur completed his 50 wickets in this IPL while playing his 50th match in IPL.

Ravindra Jadeja also scored 62 runs in this match and that is highest individual IPL score in this match. He smashed his second half-century in IPL.

T Daniel Christian played his 350th T20 match and became the first Australian player to have such a great achievement.

This was the victory with biggest margin of runs for Chennai Super Kings against Royal Challengers Bangalore in IPL. The biggest victory till now of was of 92 runs in 2009.

Faf du Plessis achieved his 9th IPL half-century since 2019.Since 2019; he has smashed the maximum number of half-centuries for Chennai Super Kings.

Yuzvendra Chahal smashed 8 runs in this match and it was his highest individual score in IPL.