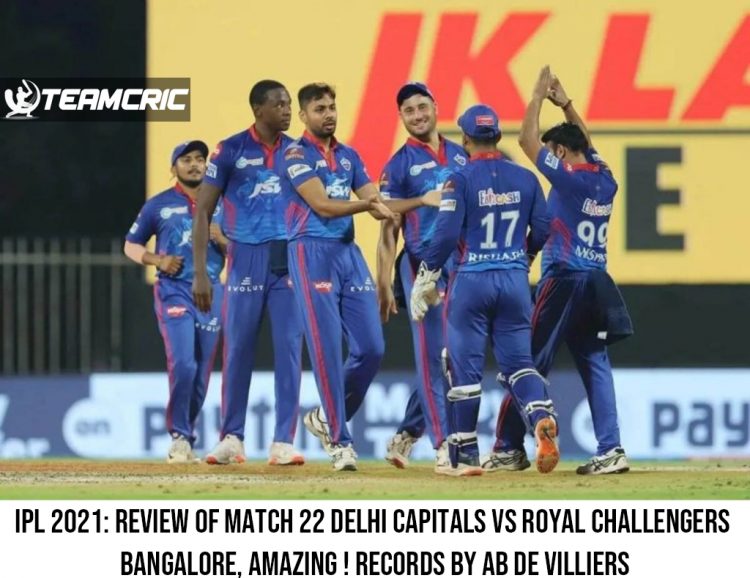 Delhi Capitals won the toss and took the decision of fielding first.

AB de Villiers performed excellently with his bat and smashed 75 runs in 42 balls with the help of 3 fours and 5 sixes, with high strike rate of 178.57.

Ishant Sharma, Kagiso Rabada , Avesh Khan and Axar Patel picked up 1 wicket each giving away 26,38,24 and 33 runs respectively in their 4 overs. Amit Mishra was able to pick 1 wicket giving away 27 runs in his 3 overs.

Second top-scorer for the team was Shrimron Hetmyer who smashed 53 runs in 25 balls.

Harshal Patel picked up 2 wickets giving away 37 runs in his 4 overs.

Mohammad Siraj and Kyle Jamieson picked up 1 wicket each giving away 44 and 32 runs in their 4 wickets.

It happened for 23rd time that AB de Villiers was unbeaten after scoring fifty+ runs in an innings of IPL and this is maximum number of times by any player. MS Dhoni is on second position in this regard with 19 times unbeaten fifty+ runs.

It happened for the fifth time that AB de Villiers smashed fifty or more runs against his former team Delhi Capitals and this is the most by an overseas player. He has made the record of scoring joint third highest in most fifty+ runs against Delhi Capitals in IPL. Virat Kohli and Ajinkya Rahane are on first and second position in this regard.

Harshal Patel is now the fifth player, who has picked up 50 wickets for Royal Challengers Bangalore. The other players are Yuzvendra Chahal, Vinay Kumar Sreenath Aravind and Anil Kumble.

AB de Villiers is now the second overseas player to complete 5000 IPL runs. David Warner is the first one to have such a great achievement.

Glenn Maxwell hit two sixes in this match and the first one was his 100th six in IPL.

It happened for the second time that Shimron Hetmyer score half-century in IPL, and that too in just 23 balls. He made his first half-century while playing against SRH in 2019.

It happened for the third time that Royal Challengers Bangalore won an IPL match by 1 run and that is the joint most for any team. Mumbai Indians also achieved victory in 3 matches with 1 run.