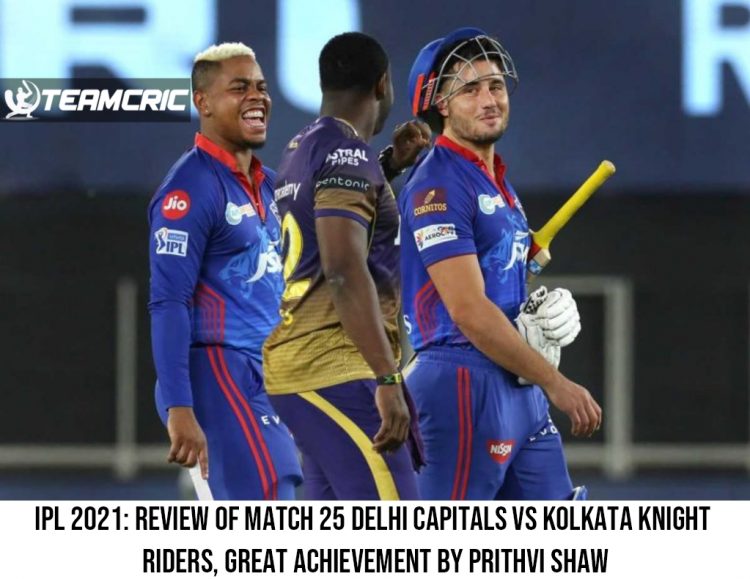 Andre Russell was in good form and smashed 45 runs with just 27 balls.

Shubham Gill performed nicely with his bat and was only 7 runs away from hitting half-century. He smashed 43 runs in 38 balls.

Axar Patel picked up 2 wickets giving away 32 runs in his  4 overs and take Kolkata Knight Riders to 154.

Lalit Yadav picked up 2 wickets giving away only 13 runs in his 3 overs. Figures of Lalit Yadav were the best figure in the match.Amit Mishra got shoulder injury and Lalit Yadav replaced him. Lalit dismissed Sunil Narine and Eoin Morgan in just three balls. Brilliant action from the side of Lalit Mishra was proved to be the turning point of the match.

Prithvi Shaw scored an extremely brisk Half century and given a vital contribution to take his team towards victory. He smashed 82 runs in just 41 balls.

Pat Cummins picked up three wickets in quickly but was unable to take his team towards victory.

The stand between Shaw and Dhawan in this match was the fifth-highest opening stand for Delhi Capitals in history of IPL, and the second-highest in IPL 2021.Highest opening stand was made in 2013 by DC is 151 runs and that was between Mahela Jayawardene and Virender Sehwag while playing against Mumbai Indians.

Sunil Narine made his second consecutive duck and third duck in five innings. He was able to score only 23 runs in last 7 IPL matches, at an average of 3.28.

Andre Russell has completed his 6000 T20 runs in this match and become fastest player to score 6000 runs by balls faced.

Before Prithvi Shaw in this match, the last time a Delhi Capitals opener, Quinton de Kock scored 50+ runs at a 200+ strike rate  against RCB in 2016.

Prithvi Shaw is now only the second player who hit 6 fours in an over in history of  IPL. In 2012 Ajinkya Rahane against RCB in 2012.

Prithvi Shaw is the first player in history of IPL to hit 6 boundaries in the first over of an IPL inning.