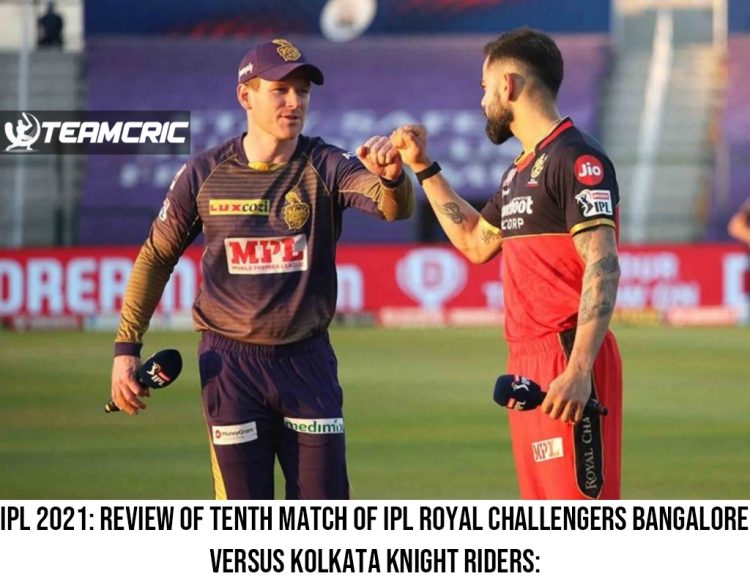 Royal Challengers Bangalore won the toss and took the decision of batting first. RCB set the target of 204/4 in 20 overs.

Kohli was not able to score much and gone for five only. After falling of two wickets early in the innings Glenn Maxwell and Devdutt Padikkal shared the partnership of 86 runs. Glenn Maxwell has shown his highly energetic performance and smashed 78 runs off 49 balls including 9 fours and 3 sixes. AB de Villiers has also played fine knock and smashed 76 runs off only 34 balls including 9 fours and 3 sixes. For Kolkata Knight Riders, Varun Chakravarthy picked up 2 wickets for 29 runs in his 4 overs

Important stats and numbers related to tenth match of IPL are:

It happened for the first time in their IPL history that Royal Challengers Bangalore has achieved the victory in first three matches of a season.

After playing 6 IPL matches, Yuzvendra Chahal took more than 1 wicket in a match.

Shubman Gill completed his 1000 IPL runs in this match. He is able to get such an achievement in 41 innings.

It happened for the second time when Glenn Maxwell scored 2 consecutive half –centuries in IPL .First time it happened in IPL 2014 when he hit 3 half-centuries.

Devudtt Padikkal was able to make only 25 runs in 28 balls with the strike rate of 89.29. For RCB opener in IPL this is fifth lowest strike rate for since 2010.

KKR has lost the matches consecutively three times against RCB. AB de Villiers won the award of 24th player of the match in IPL.