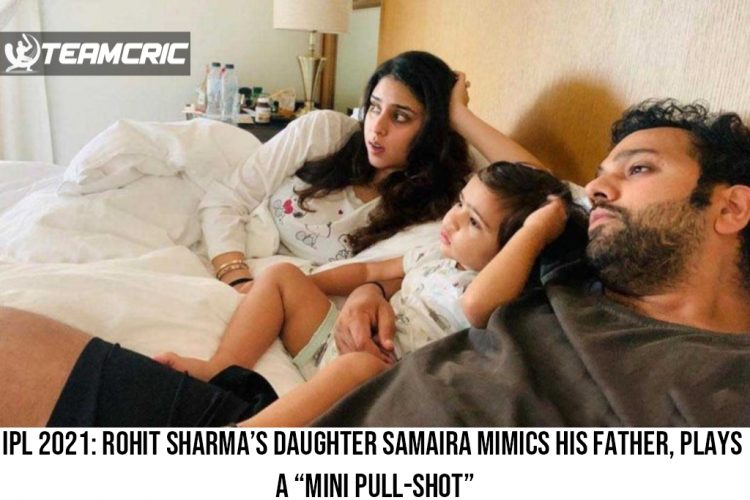 In an adorable video Rohit Sharma’s daughter Samaira was seen cheering for Mumbai Indians and mimicking her father’s batting style.

Rohit Sharma is going to be the captain of Mumbai Indians. On Monday Rohit Sharma joined the Indian Premier League champions squad for IPL 2021season. Mumbai Indians will be playing first match against Virat Kohli-led Royal Challengers Bangalore on April 9 in Chennai.

Rohit Sharma, vice – captain of Indian cricket team was in tremendous form during India vs England series. Rohit was not able to make big score in the ODIs but helped India get off to a good start by seeing off the new ball. Rohit was unable to score big in the limited-overs format but he was India’s top-scorer in the India vs England Test series.

In 2020, Rohit Sharma scored 332 runs in 12 IPL matches but he led the side in brilliant way to make Mumbai Indians win over Delhi Capitals. His performance was marvelous with 68 runs from 51 balls, while chasing 157 to win.

Not only fans but also Rohit’s family cheer him up for upcoming season of  IPL. On Wednesday, Mumbai Indians share an adorable video of Rohit’s daughter Samaira, can be seen mimicking her father’ pull-shot and cheering for Mumbai Indians. In the video, Samaira is seen wearing a helmet. When Ritika (Rohit’s wife) asks her how dad hits a six, she  plays a mini pull-shot.