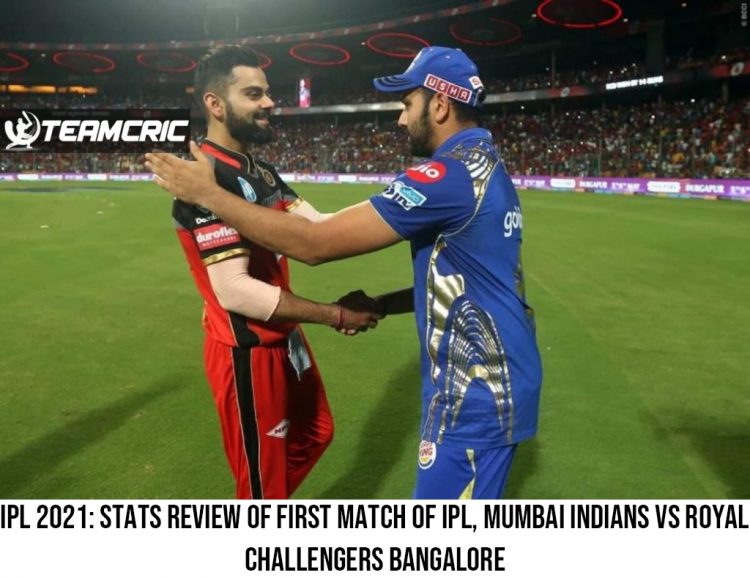 Captain of Royal Challengers Bangalore, Virat Kohli won the toss and gave the chance to Mumbai Indians to bat first. Mumbai Indians, Rohit Sharma got out early in the innings. In 20 overs a total of 159/9 was posted by Mumbai Indians. Contribution of Chris Lynn was high with 49 runs. Harshal Patel showed extremely excellent performance by picking up 5 wickets for 27 runs in 4 overs.

Chasing this total, Royal Challengers Bangalore was in control of the game in the first half of their innings. But quickly wickets were lost in succession reeling at 122/6 in 16.3 overs. AB de Villiers has shown his tremendous performance scoring 48 runs off 27 balls including four boundaries and two maximums. RCB was able to chase the total on the last ball, thus winning by 2 wickets. Harshal Patel was given the title of man of the match for his wonderful spell.

Important stats and numbers related to first match of IPL 2021 are:

1.This happened for the ninth consecutive time that Mumbai Indians lost their first match of the season. They were able to win the first match of IPL season in 2012 against Chennai Super Kings.

2.It happened only the second time in IPL when RCB was able to chased a total on the last ball of the match. Previously such an incident took place in 2012 against Pune Warriors.

6.For the fifth time , Mumbai Indians lost a match on the last ball in IPL.

7.Virat Kohli registered the record of completing 6000 T20 runs as captain in this match and thus became the first captain to achieve this milestone in T20 format.

8.Virat Kohli scored 33 runs in 29 balls in this match including four boundaries. He surpassed Robin Uthappa who made 2724 runs and became the first cricketer to score maximum runs i.e. 2753 while chasing in IPL.

10.Yuzvendra Chahal played his 100th match in IPL in this season of IPL and gave away 41 runs off 4 overs without picking up a wicket.