by teamcric
in Cricket News
0 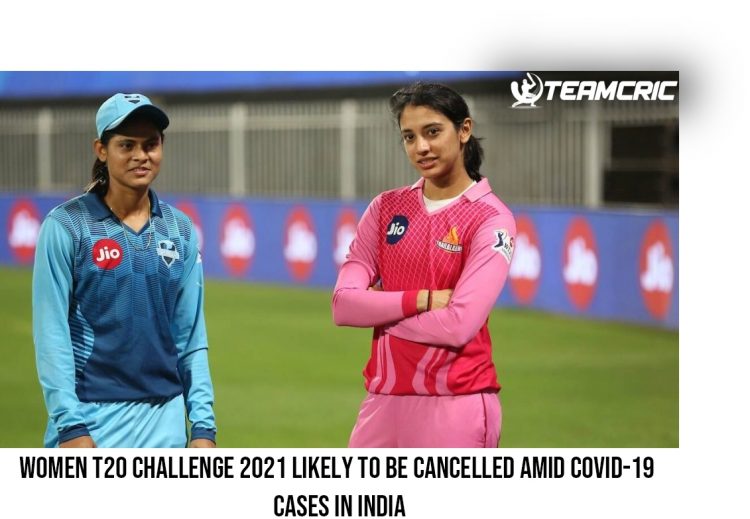 
Women T20 Challenge 2021 likely to be canceled amid Covid-19 cases in India:

The coronavirus is spreading its wings and thus troubling everybody in one or another way. The number of cases is increasing at a very high rate all over the India. Due to the second wave of the Covid-19   daily spikes of cases are registered this month. And because of this Women’s T20 Challenge 2021 likely to be canceled.

On 27th April 2021, 350000 cases were reported. And, this wave of coronavirus is putting impact on the cricketing world also.

The Women’s T20 challenge was scheduled to be held during the Playoffs stage of the 14th edition of IPL, due to the high increase in coronavirus cases it might get postponed or canceled.

The BCCI is likely to postpone the Women’s T20 Challenge 2021 due to the potential unavailability of overseas players.  Many countries are imposing restrictions for traveling to and from India.  |

In 2020, 12 overseas players were in featured in the teams for the tournament namely Deandra Dottin, Danielle Wyatt, and Nathakan Chatham, and Sune Luus.

Australia suspended all direct passenger flights from India on Tuesday because of unprecedented increase in Covid-19 cases in India. Not only this, UK has put India on the red list of countries.

Senior Indian Women’s cricketer has given the statement that devastating news is awaiting the Indian Women cricketers.

The Woman cricketer said that the players thought that this tournament will be very helpful for us to prepare for the series against England that is going to be held in June. She also stated that all the calls to the Board of Control for Cricket in India are going unanswered, and this was the last thing expected by cricketers.

“This is devastating news for us. We genuinely thought this edition will give us some very important game time before we take on the English side. All come crashing down now. Calls have gone unanswered at the moment. That was the least we expected,” said the Woman cricketer as quoted by Cricket.com.

BCCI officials stated that the primary focus at this point in time is to ensure that the 14th tournament of the IPL is conducted in safe. Some of the Australian players have pulled out of IPL 2021. BCCI might make the announcement soon in this regard.

In 2018, this T20 Challenge was started as a one-off exhibition match played between two teams. Since 2019 it featured three teams – Velocity, Supernovas, and Trailblazers.

They competition is held in four matches.

The tournament is held among 3 Women’s teams. The teams compete against each other during the Playoffs stage of the IPL.

Last year IPL 2020 was held in the United Arab Emirates the and Trailblazers emerged as the champions.

The Smriti Mandhana’s team defeated the Supernovas by 16 runs and registerd victory in the tournament.

Mandhana was also declared as the Player of the Match as she has smashed 68 off just 49 balls in the summit clash.