“You Will Hit Covid-19 For A Six”: Heart Warming message of Wasim Akram To Sachin Tendulkar 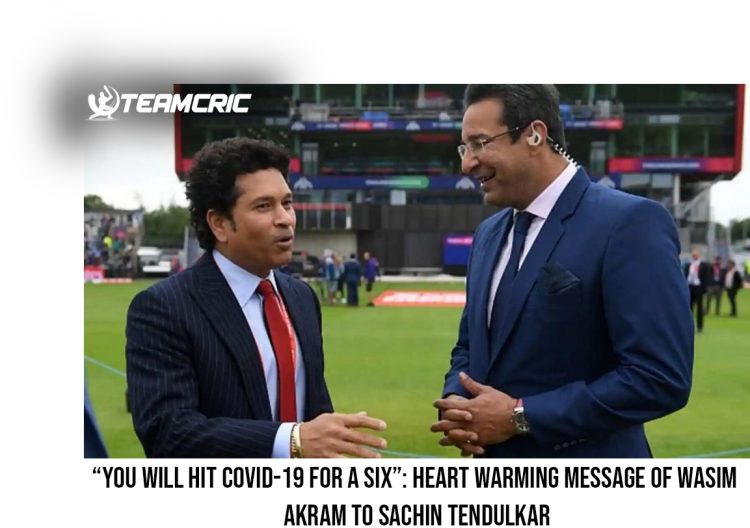 Sachin Tendulkar announced that he was hospitalized to take some precautionary measures as he was diagnosed positive of Covid-19. Wasim Akram took to twitter as the source and wished Sachin Tendulkar a speedy recovery.

“Even when you were 16, you battled the world’s best bowlers with guts and aplomb… so I am sure you will hit Covid-19 for a SIX! Recover soon master! Would be great if you celebrate India’s World Cup 2011 anniversary with doctors and hospital staff… do send me a pic,” Akram tweeted.

Tendulkar shared the news that he was hospitalized on April 2, 2021.A decade before on this day India won the 2011 World Cup and Sachin Tendulkar emerged the second-highest run-scorer after Tillakaratne Dilshan, Sri Lanka cricketer.

Akram took retirement after the 2003 World Cup and Tendulkar took retirement from all formats of cricket in 2013.
Akram, in an interview with former Pakistan teammate Basit Ali, stated that he rated Tendulkar on the fifth rank in his list of top batsmen, after Viv Richards, Martin Crowe, Brian Lara, and Inzamam-Ul-Haq. “I am keeping Tendulkar aside from this list because we didn’t play Test cricket against him for 10 years. Waqar and I didn’t bowl to him for ten years in Test matches. He came to Pakistan in 1989 as a 16-year-old and after that, we played against him in 1999,” Akram had said.

Sachin Tendulkar thanked everyone for their sincere prayers and wishes. He said that he had been hospitalized under medical advice due to taking precautionary measures. He hopes to come back home safely.

“Thank you for your wishes and prayers. As a matter of abundant precaution under medical advice, I have been hospitalized. I hope to be back home in a few days. Take care and stay safe everyone,” Tendulkar wrote on Twitter.

Even when you were 16, you battled world’s best bowlers with guts and aplomb… so I am sure you will hit Covid-19 for a SIX! Recover soon master! Would be great if you celebrate India’s World Cup 2011 anniversary with doctors and hospital staff… do send me a pic! https://t.co/ICO3vto9Pb

Tendulkar was one of player of India Legends in the Road Safety World Series and he is fourth player to test positive for COVID-19.Before this, Irfan Pathan, Yusuf Pathan and Subramaniam Badrinath were also diagnosed positive for Covid-19.