ZIM vs PAK 2nd T20: Amazing! It is Zimbabwe first and historic T20I win against Pakistan:

by Sheikh Suleman
in Zimbabwe Versus Pakistan
0 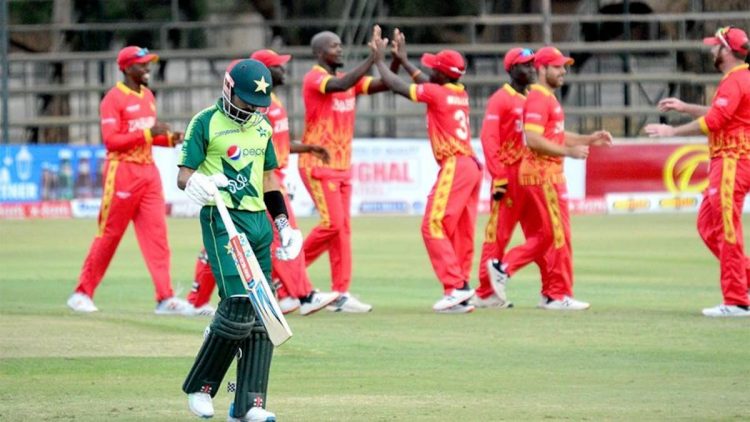 For the first time it happened in history that Zimbabwe defeated Pakistan in T20 Internationals.

After missing out victory in the first T20I, Zimbabwe made amends in the second match. It was a really moment of pride for Zimbabwe as they registered win against former no.1 ranked T20I team in ZIM vs PAK 2nd T20 match.

Captain of Pakistan, Babar Azam won the toss and took the decision of fielding first.

Tinashe Kamunhkamwe was the top scorer as he smashed 34 runs in 40 balls with the help of 4 fours. Faheem Ashraf removes Taylor cheaply for 5 runs only in 7 balls. Arshad Iqbal removed Marumani for 13 runs in 19 balls.

Apart from Tinashe Kamunhukamwe, no other player could put up a fight as Pakistan bowlers kept picking away wickets at regular intervals. 18 runs were scored by Regis Chakabva in 14 balls with the help of 1 six.

Batsmen of Zimbabwe struggled to give their best but Pakistan bowlers were quick in chipping away wickets at regular intervals.

During the chase of ZIM vs PAK 2nd T20 match, it does not seem easy for Pakistan either and team failed to gain much momentum. They could manage only 26 runs and lost the wicket of Mohammad Rizwan in power play.

Babar Azam was the top scorer as he smashed 41 runs in 45 balls with the help of 5 fours and tried hard to take his team toward victory. His efforts went in vain and Zimbabwe bowlers also kept striking back with wickets.

Danish Aziz smashed 22 runs in 24 balls with the help of 1 four but it was not enough for Pakistan. Other batsman of Pakistan was not able to perform well with their bat as apart from Azam ,Rizwan and Aziz no other bastsman could reach the double-digit mark. All players of Pakistan were bowled out for 99.

Luke Jongwe has shown brilliant performance and picked up 4 wickets for 18 runs in his 3.5 overs.4-wicket haul made by Luke Jongwe led Zimbabwe towards historic win.

Pakistan was able to manage 99 runs in 19.5 overs and thus lost the match by 19 runs. The victory helped Zimbabwe level the T20 series 1-1.

Babar, the Pakistan skipper accepted that the team played cricket in poor way in the batting department and credit for playing good cricket goes to Zimbabwe.

He added that the surface was stopping and was two-paced but there should be no excuse as professionals are meant to deal with such kind of problems. At last he has shown the hope to come back strong in the next match.

On the other hand Taylor was a happy after Zimbabwe’s comeback in the game. He said that it was big turnaround from the first game and only this can be asked of players.

Giving the credit to players he said that players executed the plans superbly.He accepted the fact that he was not confident (of defending 118) but the team dug deep in the power play.

Taylor said in pride that they squeeze Pakistan, and credit for this achievement goes to commitment and dedication.